Madica's heart skipped a beat. Every fairy child knew how Santa Claws made elfs. It was why so many of them lay sleepless at night, listening for the sound of him squirming down the chimney with his sack in his hand to steal them away and put their brains in jars and then—.


It had whiskers on its cheeks, which would have looked sweet if it didn't also have a pair of gleaming tusks stained with something Madica sincerely hoped was just rust. It's blarstin' time! Clown Face froze at the word. Socks socks socks! His final kick must have hit the trigger, because with a sudden phwoosh! The missile spiralled up the hill, trailing sparks and smoke behind it, until blam!

It exploded in mid-air. Or not. Because a moment later, the air sparkled and fizzed, rippling with rainbow colors, and—. There, right in front of her, no longer invisible, was Santa's secret factory. It was bigger than any building Madica had ever seen—she could have stacked ten copies of her school on top of one another and still not reached its steeply-slanted roof. Turrets and towers, windows of all shapes and sizes, and—. A chill ran up her spine.

A giant flying saucer was moored against the side of the factory, bobbing gently in the Arctic breeze. She recognized its scarred silver underbelly. It was the saucer that had taken Laurellen. She Madica decided it was definitely a 'she' looked at the other elf and sighed in a way that suggested that if she had eyebrows, she would be raising them. Password or not, he will be wanting to see you. This way, dear.

The inside of the factory was whiter than the snow outside. Everything had been scrubbed, polished, and scrubbed again: the square tiles on the floor, the paint on the walls, even the cobwebs and skeletons. But I'm sure it isn't nearly as dank as the ones the humans keep you in. Madica blinked. She was about to say, "The humans don't keep us in dungeons—they don't even know we exist," when the cat's claws dug ever so lightly into her skin.

The polished white hallway led to an escalator whose steps seemed to be carved out of ice.

It took them to a room bigger than Madica's whole house. Round frosted lights dangled in clusters from its ceiling like glowing white cherries. On the far side was a desk twice Madica's height, and at the desk sat—. Madica put her hand to her mouth. The elf wasn't sitting at the desk—it was the desk. Beneath its beaky face and four long arms, a squat body merged with the desk's cast-iron top.

Every few seconds a little bell went ding! The deskbot glanced at it, muttered, "Naughty," scribbled something on it in bright red ink, and fed it into a different slot. Whiskers cleared her throat. Secretary, sir, with a prisoner for Himself. Madica shook off the elf's hand.

I'm not going anywhere until I get some answers. Where are my friends? And why did you take them?


The deskbot finally looked up at her. Madica caught her breath. Little streaks of rust ran down its beak like the tracks of ancient tears.

Above them, its eyes glowed red with malice. Now you, take her to the fitting room and—wait! What's that? The other three continued their mad ding! The deskbot slapped a big red button in the center of its desk. An alarm start squawking like the world's angriest seagull. The tip of the deskbot's finger flipped up.

A tiny light at its end glowed exactly the same red as the lasers that had tried to shoot down the saucer just a few minutes before. Their lasers were much bigger than fingers. In fact, they seemed bigger than some of the elfs themselves, especially the ones pointed at Madica. Madica grabbed the zipper of her coat, pulled it down, shrugged her arms out of the coat, and threw it into the air.

At precisely the same moment, the deskbot barked, "Three!

The coat and its collar burst into flame. Madica coughed at the stink of burnt hair and melting plastic. The deskbot hissed with disappointment. But better safe than sorry. Take care of this. It pointed its left arm at the smoldering remains of Madica's jacket. With a whir and a gurgle, wet white foam sprayed onto the flames. She wrapped her arms around herself, already starting to shiver.

Then her eyes widened and her hand flew to her face. At the sound of the word 'form', the deskbot had looked up again. The malice that Madica had seen in its eyes moment earlier was nothing compared to the glare of utter hatred it turned on the cringing elf beside her now.

How many I already have!? Look at them all! Double escort and double quick! Give the fairy the usual, and turn this one into a photocopier! An unyielding metal hand closed around Madica's arm. 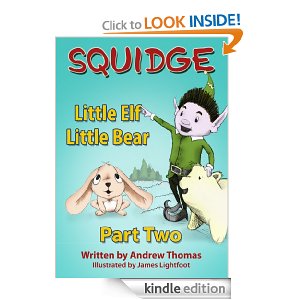 Another clamped itself on Whiskers's shoulder. The rest of Santa's castle—at least, the bits that Madica got to see in the next few minutes—looked a lot more like a run-down factory than the gleaming marble entrance. The walls were gray bricks streaked with rust. The lights overhead flickered in time with the thunking and clanking of heavy machinery behind the walls. One corridor led to another, which in turn led to a flight of stairs that went up and up until Madica was panting for breath. The whiskered elf trudged along miserably beside her, never once glancing left or right.

She can't keep up with the likes of us 'til she's been to the—the fitting room. She had been warm enough while she was walking, but as soon as she stopped, the arctic cold of the factory had seeped through her school sweater. It shoved her again, less gently than before. Another corridor, another flight of stairs, turn left, turn right Madica gave up trying to keep track of the way they had come—she just couldn't keep it all straight in her head.

And she was so cold now that her teeth were chattering. Tired as she was, she didn't dare ask to stop again—she might never be able to get going again. But then they turned a corner and opened a door that look no different from any other and it was warm, beautifully warm, warm like being snuggled under a blanket in bed early in the morning before her parents knew she was awake. She turned to the whiskered elf to say, "Doesn't this feel wonderful? Secretary's orders and all.